Did you know that there is a traditional Japanese sweets shop situated in Higashi-Osaka? This WAGASHI shop is called “Shofukudo” and is located only 7 minutes away from Fuse station. As it is not located at the main Fuse shopping street, you might not know about it. It is, however, one of Fuse’s hidden treasures, making it more than worth a visit. 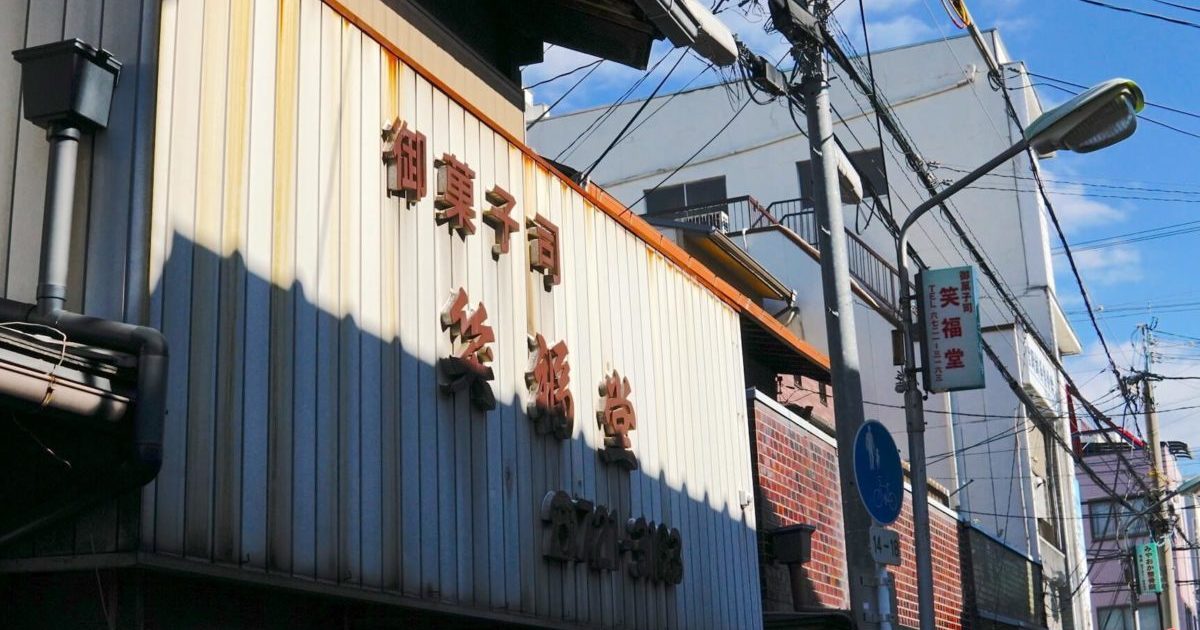 Shofukudo was established in 1903, during the Meiji era. That means this shop has an impressive history of 116 years! The store’s experience makes it a well-established family business in Fuse.

But actually, the shop’s name has not always been”Shofukudo”. When the shop started its business back in 1903, it was called “Yakko mochi”. Later on, however, the owner decided to change the name to Shofukudo.

Shofukudo is written like this in kanji: “笑福堂”. “笑”means smile, “福” means luck and “堂” means store or company. Because the owner wanted his customers to smile and be happy while enjoying his food, he chose these kanji and re-named the store Shofukudo. What a nice way to show your store’s philosophy.

However, many people even nowadays mistake the shop’s name when they visit. The reason is that Shofukudo’s kanjis can also be read as “Emifuku-san”. One of the many difficulties of the Japanese language.

The owner who is running the business today is called Mr. Dekura. He is the forth generation sweets manufacturer in his family to keep the shop going.

While Mr. Dekura may be a little shy, he is patient and friendly. When our staff members visit the shop, he always makes sure to show us around his sweets factory. He also often goes out of his way to teach us in incredible detail how to make his pretty sweets. Mr. Dekura’s kind heart is what makes the shop even more special. 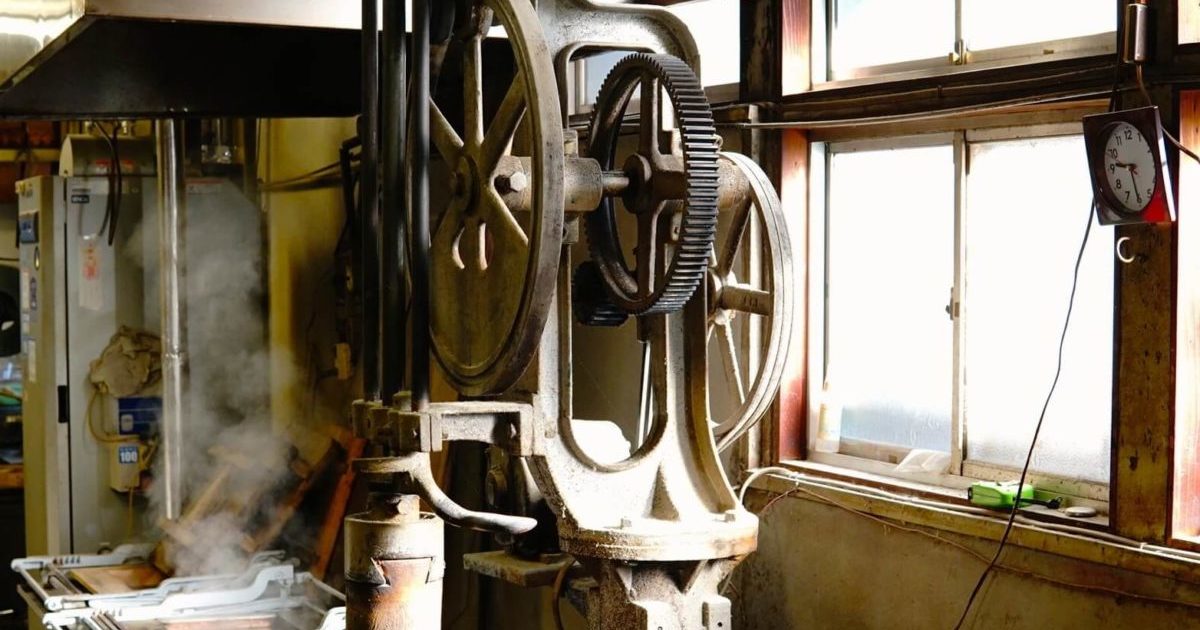 Can you guess what this machine is?
This is a machine for pounding Mochi (Japanese sweets made from rice). It was regularly used for sweets-making a long time ago, which is why it’s not really in use anymore.
Now, Mr. Dekura owns a much more efficient machine to make his sweets, but still
you can tell how heavy the machine must be just from the picture, right? What an impressive old instrument.
While I have been to some Japanese sweets shops before to purchase sweets, being able to enter the factory and observe the whole process is a really rare experience, even for Japanese people. This makes the whole experience even more valuable. 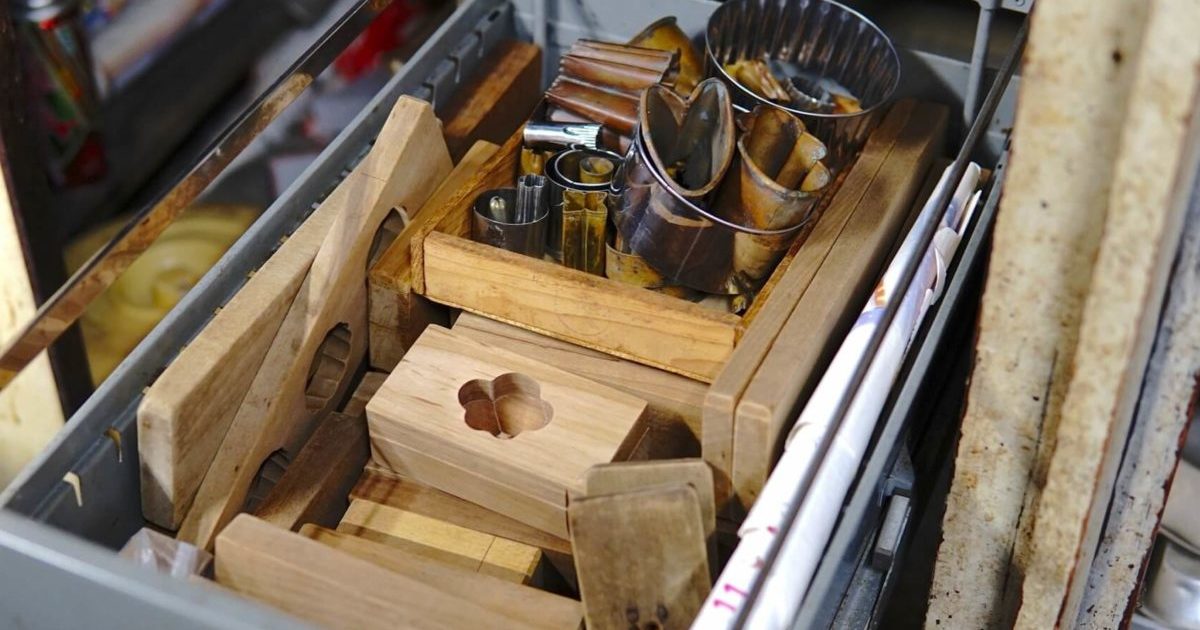 These are just some of the wooden tools Mr. Dekura owns. They are used for shaping small and detailed parts of the confectionery.
In this picture alone, there are at least 50 different kinds of them. Mr. Dekura however says that there are about 100 (!!) types in total, meaning that you can make at least one hundred differently shaped sweets. 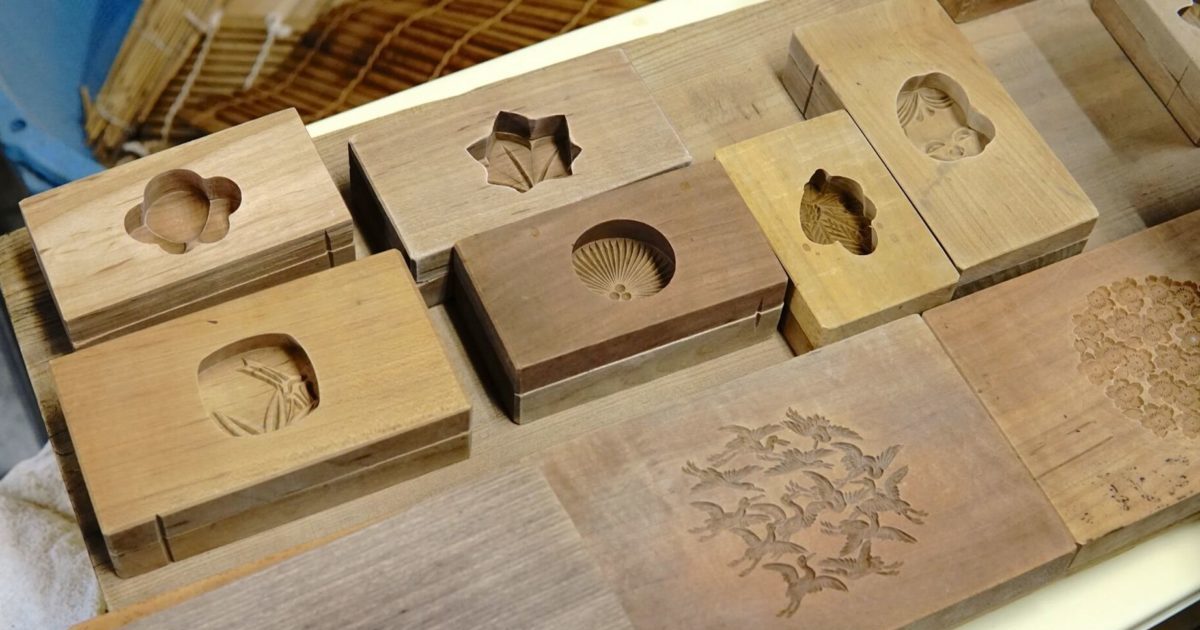 The wooden tools are carved  beautifully in different designs to shape various forms of sweets.
You cannot make Japanese sweets without them, and even then the process requires a lot of technique.
Every sweets manufacturer usually selects each tool by his passion and liking, which is why you might find different ones somewhere else.

Today, we, the SEKAI HOTEL staff, were allowed to experience the making of traditional Japanese sweets! (This activity is only available for SEKAI HOTEL guests.)
It was actually the first time for us as staff members too, so we were really excited.

Let the confectionery-making begin!
First, you need to create small parts of the decoration with colored red bean paste (called Azuki in Japanese). 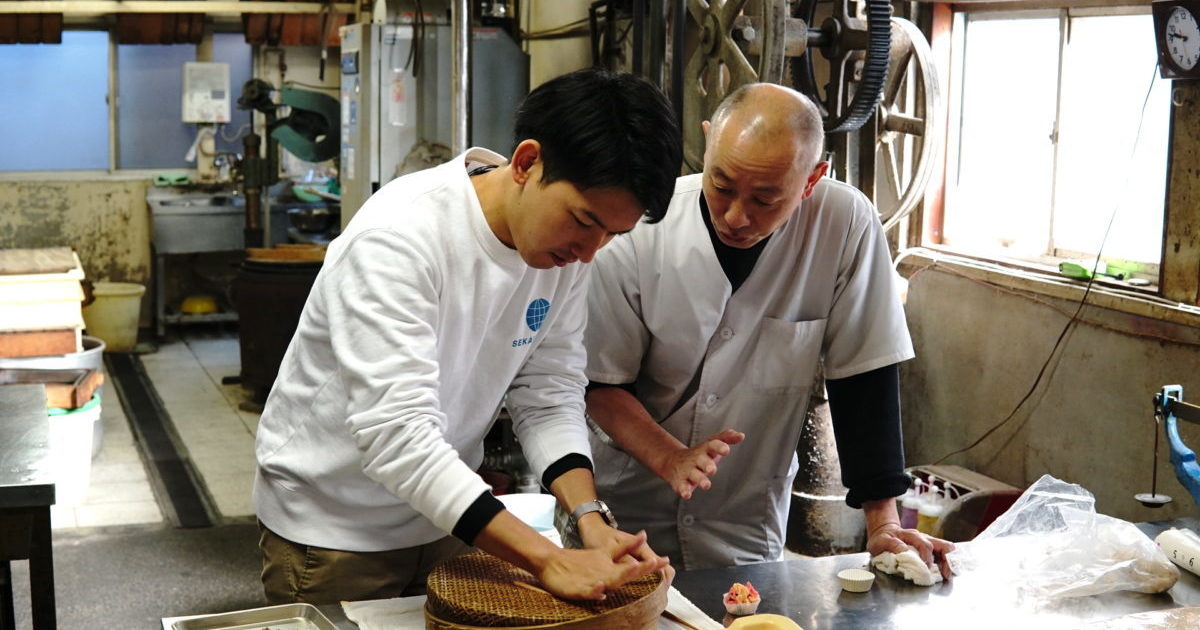 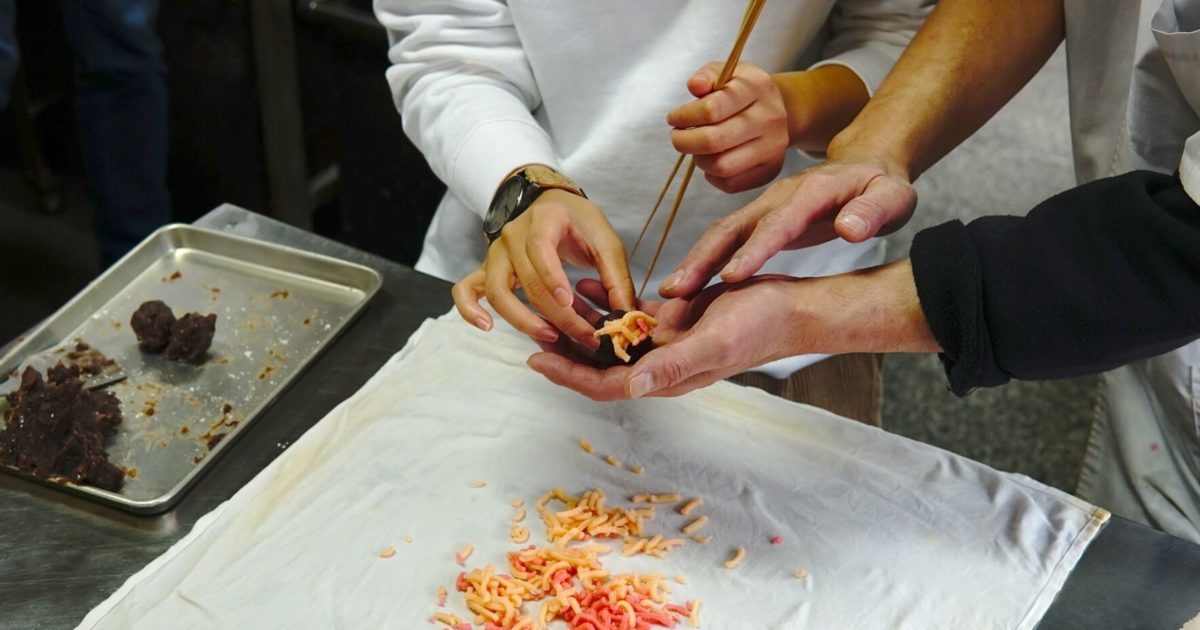 We chose red and orange Azuki, because we wanted to express the color of autumn leaves, but it was so difficult to change up the colors in a pretty and aesthetic way…
The shopkeeper makes everything look so easy, but to us using these thin chopsticks was very hard.

After a lot of trial and error, we finally finished our little masterpieces!
By the way, the left one in the front was made by Mr. Dekura. You can immediately tell by the perfect colors and shape. The ones we made might not be as beautiful, but we made them with love. 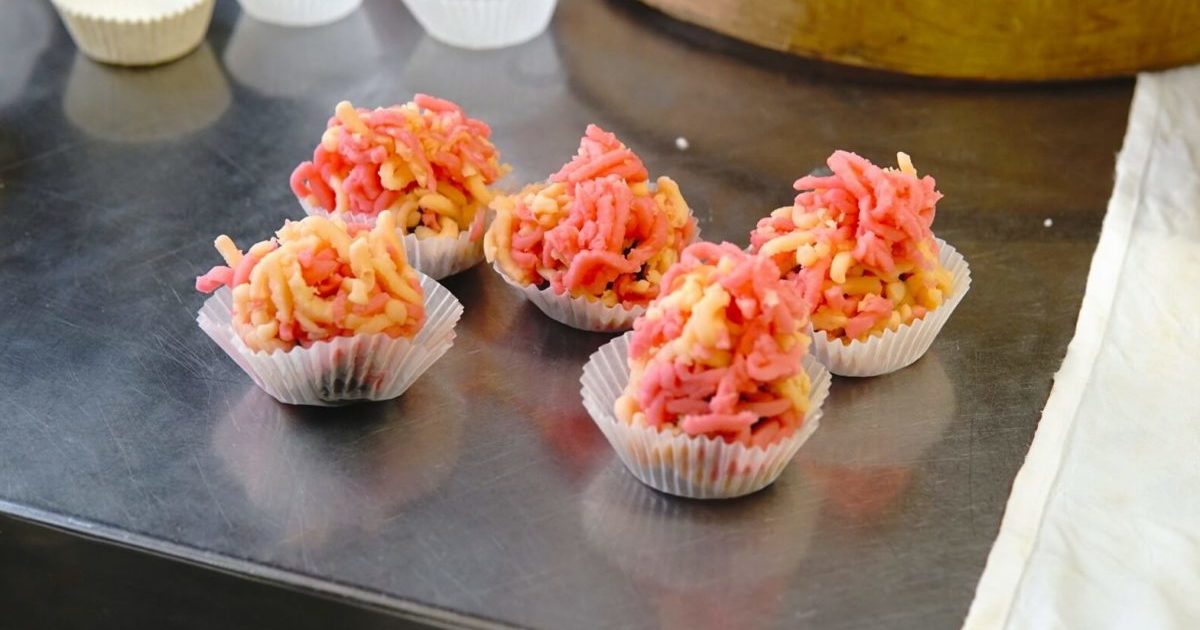 Every time I see Mr. Dekura’s work, I get impressed by his formidable traditional technique.
However, he always humbly says that ” It’s like playing with clay.”.

Since we got this rare chance to interview him, we asked about his opinion regarding his job.
Expressing his thoughts on his craft, he said that “Sweets are just like living things. Each sweets expresses the feelings of the person who made it. That’s why I always make sweets with my soul.”

In relation to the tourism industry, he also said that he wants to spread the wonderful Japanese culture to people around the world, especially young people.
The so-called WAGASHI（Japanese sweets) are actually included in WASHOKU（traditional Japanese food) as part of the World Intangible Cultural Heritage. This makes the art of WAGASHI a treasure that has to be protected.
Consequently, Shofukudo is one of Fuse’s hidden treasures, making the customer feel closer to Japanese culture.

As we were about to leave, Mr. Dekura handed us over four big boxes of sweets, as a souvenir to take home. Everyone was excited to try the various sweets, since just like the founder of Shofukudo said, sweets always make people happy. We really appreciate the shopkeeper’s kindness and the sweet delights he gave us.

Shofukudo offers different types of sweets depending on the season, so make sure to try as many as you can. If you want to try and make your own traditional Japanese sweets, feel free to contact us or talk to the reception staff at SEKAI HOTEL Fuse.

Mr. Dekura’s delicious sweets are waiting for you at Shofukudo in Fuse. 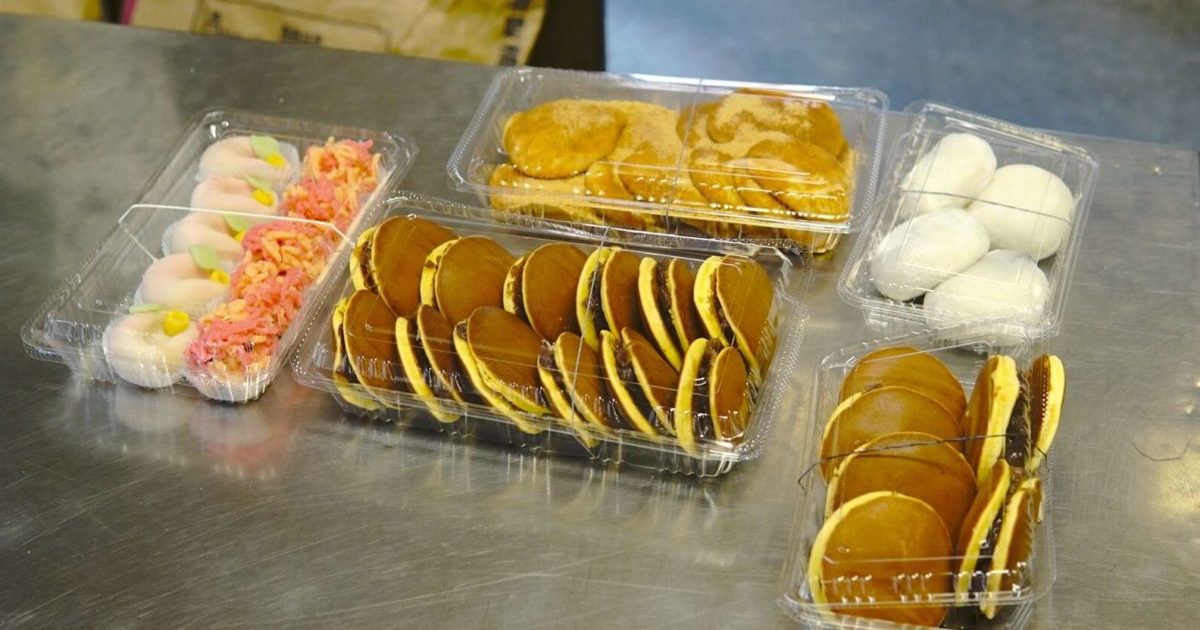